Republic of Ruin
Find Out 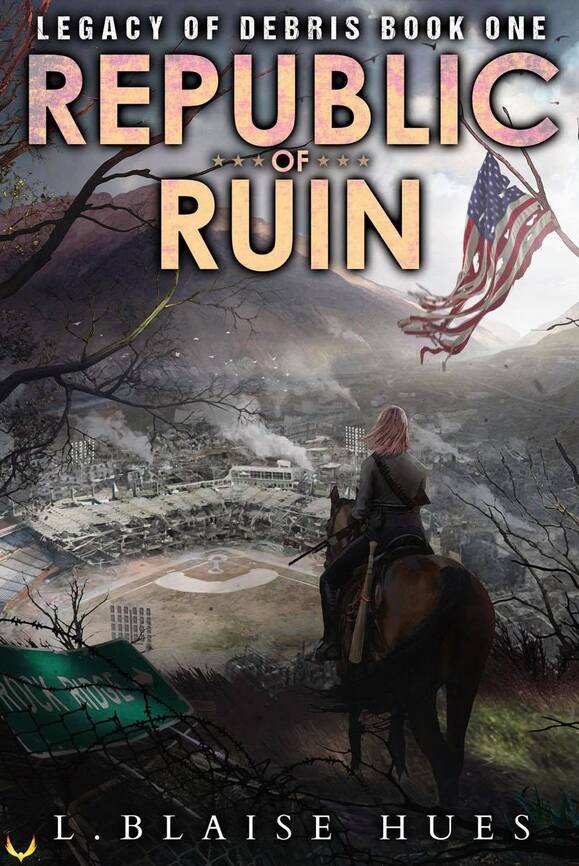 Once upon a time, I loved playing baseball in the yard with my dad. I loved the crack of the bat as it bit the ball and sent it soaring out past the cornfields. I loved the way he lifted me over his head and spun me after I rounded home plate. Most of all, I loved when my father smiled at me with his clear blue eyes as he exclaimed, "Ellie, you're the best player in Texas!"

But once upon a time was over three years ago, and now, all of those things are dead. The corn. My father. Even baseball.

Rock Ridge had always been the poster-town for patriotism, with American flags proudly displaying fifty white stars along every block. Entrepreneurial children jumped up and down on street corners with handmade signs touting their ice-cold lemonade. Nearly every weekend, neighbors gathered in cul-de-sacs and backyards for barbeques with hotdogs, hamburgers, beer, and cans of Coke. State fairs and rodeos brought us all together in friendly competitions like mutton busting, team roping, and steer wrestling. Old women at craft fair booths sold their knitted hats and socks for newborns. Our great nation had baseball games with Cracker Jacks and thousands of fans singing “Take Me Out to the Ballgame,” while they waved foam fingers and ate ice cream out of helmets.

We celebrated Independence Day with parades where policemen threw salt water taffy out the windows of their patrol cars for the neighborhood kids to snatch up, and we sat outside on blankets in the grass and watched fireworks burst open in the night sky, reminding us all that throughout every war in America's history, “our flag was still there.”
​
But now, our flag isn’t "gallantly streaming." We lost the war. Everyone lost. So much for the home of the brave. We were brave. But now, well, now we’re scared. And scarred. These days, the pomp of parades has been replaced with a doleful dirge.
When Rock Ridge was shelled during the Supply Wars, the dust from the rubble fell for weeks, as though some colossal volcano, just out of sight, continued to belch out debris. The earth shook with every round of missiles, and the fumes and chemicals left in their wake made the air toxic and dangerous, temporarily dimming the sun and completely blotting out the stars.  Any light that managed to show up in the dark sky filled us all with unspeakable anxiety. We were scared to leave our homes and terrified that if we stayed in them, some rocket would come through the roof, and the last thing we’d hear would be our own screams of agony.
To add insult to injury, some foolhardy leader recklessly set off a string of EMPs. The official name for it was a high-altitude nuclear electromagnetic pulse. It was a warhead detonated in the mid-stratosphere—a weapon of mass destruction. The ions interacted with the Earth’s magnetic field, making the EMPs stronger than they otherwise would have been. Perhaps some distant corners of the world, like Niue or Antarctica, were unaffected, but I doubt it.
Someone detonated enough of these warheads to cause everything running on electricity to completely die. I guess it was a bomb, like a nuclear explosion, but instead of taking out buildings, it knocked out all the power—nearly everything classified as “technology” short-circuited or blew up. All of the planes fell out of the sky, while ash, dust, and rocks continued to sprinkle around us like confetti at a party; though, I'm sure no one was celebrating the magnitude of death and loss caused worldwide by the Supply Wars and the subsequent EMP attack.
I don’t know how it worked, but here we were with cellphones, flat screen TVs, washing machines, and watches smarter than any human, all silent. No internet. No cellular communication. No shopping centers. Billionaires with offshore accounts were just as poor as the rest of us. Digital money didn't matter anymore. It was rendered meaningless. Scattered about town were the remaining few who had working generators and old running cars, rare and coveted commodities in times like these. And everywhere we saw the return of bartering in order to conduct trade. And, in some instances, the return of slavery.
At least, that’s how I felt.
Prior to the EMP attack, technology had become some omniscient player in the world—like a friend or a vengeful god. In the war, that technology became an enemy, and someone thought that if they killed it off, it would end the war and the worldwide massacre. And they were right. It did.
For a while.
After every major city had been bombed and shelled, we, the survivors, were without basic necessities like clean water and adequate food—in addition to the various other commodities we'd come to rely on. While the foreign threats had been subdued—with millions now dead, and most technology rendered completely useless—here in America, we faced the barbarism of desperation. Men, women, and children were starving and dying.
When I was a child, I wanted to believe the world was a good place with good people trying to do what they thought was best even if it wasn’t.
But that’s not the world I have come to know.
The world is dark, and not just at night with only the glow of lanterns or candlelight. Human hearts can be darker than the blackest night.
I close my eyes and try to go back to that "once upon a time," but it’s quickly fading, along with the last embers of my hope.
Buy it on Amazon